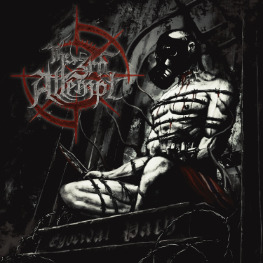 Well, there are some albums in Black Metal one would desire to have more innovation, diversity and more courage. However then there are album I do believe "I don’t give a shit". This is the case with the present album of The 3rd Attempt. This is the new band from the two guitar players of Carpathian Forest. A lot of things especially the riffs and athmosphere one had heard already with for example Satyricon or Keep Of Kalessin. Nevertheless "Egocidal Path" has a special flair of wild enthusiasm and good ideas.

Dark and epic horrible and sometimes disharmonic guitar outpourings attend over and over again nearly soundtrack like choirs or/and keyboard sounds. They never take the song completely but rather create a scary athmosphere.

The Norwegians don't make the mistake of many bands of this genre to count only on high speed banging. That makes the album special. Variety in excellent guitar parts intersperse with mangy Black 'n' Roll parts and in the next moment they pour an epic and rotting melody out of the listeners. Even the vocals aren't mindless screams. It rather adjusts variedly to the current song structures. That makes the songs perfect with a recall value.

The album is defined by the riffs that are sometimes concisely shredding, disharmonic or epic and then again knock the staccatos out.

Even the arrangement is really intense without exaggerate but it destroys controlled the ears of the listeners. This is up to the production that is certainly transparent but always sounds mangy.


Conclusion:
This is an excellent chunk of Metal that must be listened to if one likes Satyricon, Watain or Keep Of Kalessin.